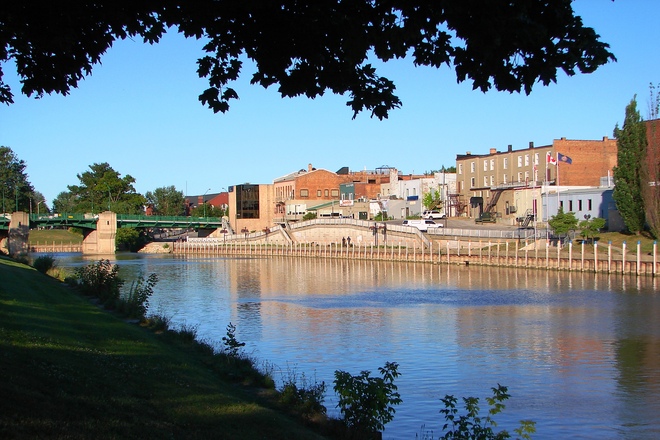 Strength in numbers, they say, and Chatham-Kent is living up to that ideal. In 1998, the network of small towns and counties, which include large expanses of rural lands in Southwestern Ontario, decided to amalgamate and form the municipality of Chatham-Kent, making it a strong and single-tier municipality. The amalgamated municipality is quite large, sprawling over close to 2,500 square kilometres. According to the 2011 Census, the population is 104,075, with 44,074 residents in the former city of Chatham alone.

Spanning across the Thames River and with its origins as a settlement around a naval dockyard, the development of the Chatham area closely mirrors its namesake, Chatham, Kent in England.

The area encompasses a lot of agrarian land and forestry, sprawling along the coastline of Lake Erie. Several farming communities were settled by those of French origin in the 19th Century, creating a number of francophone communities that still exist today. It’s interesting to note that over 8,500 residents of Chatham-Kent identify French as their first language, and a significant number speak French at home as their primary language.

There are some significant and historical First Nations reserves in this area of Southern Ontario and Chatham-Kent borders on Bkejwanong – Walpole Island. The diversity throughout these communities is quite impressive, as Chatham-Kent takes its place in history as a stop on the Underground Railroad, assisting in the emancipation and safe harbour of African Americans escaping slavery. The area wasn’t simply established as a British holding, there’s amazing history and diversity in the area’s development.

Chatham-Kent is part of the African-Canadian Heritage Tour. As a participant in the Underground Railroad and home to Uncle Tom’s Cabin Historic Site – a museum near Dresden – there are several events that pay homage to this important era in history, including the Buxton Homecoming in September.

There are several historic festivals celebrated throughout Chatham-Kent. Halloween sees the haunted tour of historic buildings while The Battle of Longwoods reenactment is a favourite Labour Day activity. Ridge House Museum puts on many seasonal events, sharing historic versions of the holidays with visitors. Theatres and stages can be found through the region with a strong support for the arts including theatre, music and film. Classic car shows, of course are a strong community interest and draw a lot of enthusiasts to the area. With numerous lakes, including Lake Erie, there’s also a thriving beach culture in the summer, and a lot of tourism and travel to the area’s incredible natural preserves and provincial parks.

Referred to as the “Industrial Heartland,” Chatham-Kent’s economy has two major strongholds, agriculture and the auto industry. The farms in this community are heavy producers of grains and oil seeds. Chatham-Kent also holds the distinction of producing the majority of Canada’s seed corn, tomatoes and sugar beets.

Chatham-Kent can trace its automotive history back to the birth of Hank Chrysler, father of Walter P. Chrysler, the man who would found the Chrysler Corporation. The actual industry can be traced back to the first automotive plant, Gray-Dort motors Ltd., active from 1915 to 1925. While Gray-Dort might no longer be a household name, the Model 4 Roadster and the Model 5 Touring Car were mass-produced in Chatham in those early years.

Today there are several facilities throughout the amalgamated municipality. Airbags as well as emissions controls and plastics are produced in Tilbury, engine components in Thamesville and numerous parts in Blenheim. The area is home to the world’s largest vintage car auction house and a highly regarded restoration centre. There are a disproportionate number of vintage cars in the area, giving the moniker “The Classic Car Capital of Canada” to the area.

There are several large businesses, like Union Gas and Pioneer Hi-Bred Limited and there’s a growing industry in technology companies. Green energy is also finding a home to be studied and grown in Chatham-Kent. The opening of CARES – Centre for Agricultural Renewable Energy & Sustainability has put the University of Guelph, Ridgetown Campus, poised to be the focus of study of on-farm renewable energy technologies. Bio-fuel development by Greenfield Ethanol – Canada’s largest supplier of ethanol, industrial fuel and drinking alcohol, has a state-of-the-art research in development centre in Chatham, focused on advancing the bio-fuel industry. Small businesses and tourism also make up a significant part of the economy.

Located just off of Highway 401, the area is on the country’s major access artery, making it easy to travel through the community. Highway 40 travels directly fro Chatham-Kent to the US border. The Talbot Trail is local sections of Highways 2 and 3 and is the main routes for travelling between different counties. Via Rail has regularly scheduled passenger travel service to the area, while the CNR and CPR railways service the area’s freight transportation needs.

Hank Chrysler, father of Walter – the founder of Chrysler automobiles – was born in Chatham. June Callwood, the iconic writer and activist was also born in Chatham, while author and playwright Roberston Davies was born in Thamesville.

Goderich at a glance

View our properties in Chatham